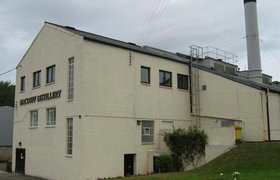 In 1958, the Macduff distillery was founded opposite Banff, by a syndicate under the name of Macduff Distillers Ltd, the group included George Crawford, Brodie Hepburn, James Stirret and Morty Dyke. A couple of years later production commenced and, over the course of the 1960s, further stills were installed, bringing the total to four. The Macduff distillery draws its waters from the Gelly Burn and lies on the east bank of the River Deveron in Banffshire. During the 1960s, Scotch whisky exportation increased threefold.

In 1972, William Lawson Distillers acquired the distillery and eight years later they, in turn, were acquired by Martini Rossi. During William Lawson’s tenure, they established Macduff as a component of the William Lawson blend, a very popular Scotch whisky which sells in excess of fifteen million bottles yearly. Indeed, Macduff whisky has long since been used as a blending product. Despite this, Macduff is still bottled as a single malt, though sometimes under the name Glen Deveron.

Just fewer than half a million bottles of single malt whisky are released from the distillery each year and the majority are exported to France. In 1990, a further still was added, bringing the total to five. Five is a rather unusual number of stills, indeed there is only one other distillery with a combination of two wash and three spirit stills, namely the Talisker distillery on the Isle of Skye. The Macduff distillery is currently under Bacardi ownership following their acquisition of Martini Rossi in 1992. Bacardi subsequently transferred the distillery to John Dewar and Sons.