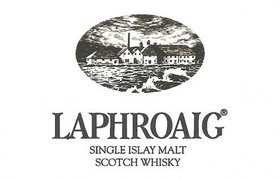 Laphroaig is a distillery whose malts are massively individual and utterly distinctive. The distillery was founded in 1810 by brothers Donald and Alexander Johnston on what was originally a family run farm in a small bay on the southernmost tip of Islay. Laphroaig’s unique flavour comes in part from its vicinity to the coast and the high moss content of its peat, which is processed in the distillery’s own floor maltings.

Until 1954, Laphroaig was owned by members of the Johnston family. In 1847, co-founder Donald Johnston died in dramatic circumstances - after falling into a scaulding kettle of burnt ale - and for the next decade Walter Graham, manager of neighbouring distillery Lagavulin, ran the company. Laphroaig returned to Johnston family hands in 1857 when Donald’s son Dugald gained ownership.

Recent owners have included Allied Domecq, who were proprietors from 1990 to 2005. Allied also included the distillery as one of the four single malt makers of Caledonian Malts. Laphroaig (pronounced ‘La-FROYg’) is currently run by the US company Fortune Brands Inc and from 2002 it has consistently been the best-selling Islay single malt whisky worldwide. Within those seven years sales have increased by 50%.