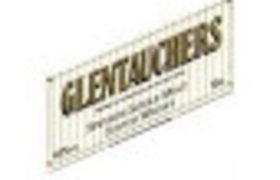 The Glentauchers whisky distillery was founded in 1897 by W P Lowrie, a Glasgow-based whisky trader, and James Buchanan, a renowned blender. Five years later, Lowrie experienced financial hardship and James Buchanan subsequently bought him out. The distillery was built at Tauchers Farm, four miles west of the town of Keith. The location was chosen for its proximity to a rail line and main road. Indeed, the Glentauchers distillery boasts its own railway siding.

The distillery was designed by a Keith-based architect, John Alcock, and the construction was directed by the famed Charles Doig, an Elgin-based architect who was instrumental in the design of many Scotch distilleries. James Buchanan merged with Dewars in 1915 and during the 1920s the distillery went through considerable renovations. This included the rebuilding of the mash house and floor maltings. The newly formed Buchanan-Dewars merged with Distillers Company Limited in 1925 and five years later the distillery was transferred to Scottish Malt Distillers. During the 1960s, further stills were installed, bringing the total capacity to 3.4 million litres per annum.

In 1985, the distillery was closed down. It was four years later that Caledonian Malt Whisky Distillers, a subsidiary of Allied, acquired the distillery and in August of 1992 spirit flowed from the stills once more. Glentauchers is at present under the watchful eye of Chivas Brothers, following the acquisition of Allied. Recently there have been substantial investments to refurbish the buildings and equipment. The spirit is filled onsite into bourbon casks. The distillery even boasts its own warehousing facilities with space for 6,000 casks. The remainder of the new make spirit is transported to the Chivas central warehouse for maturation. The Scotch whisky from Glentauchers has long since been associated with blends; it is a large component of Ballantines, Teachers and Chivas Regal.
Lees meer
Lees minder
Geen producten gevonden