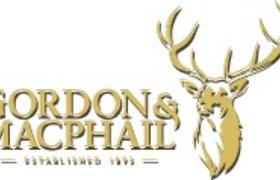 Gordon and MacPhail opened their premises on South Street, Elgin on the 24th May 1895. The company was founded by James Gordon and John Alexander MacPhail and they decreed their product would be ‘a superior article at a popular price’. As did many whisky traders, Gordon and MacPhail sold other products in addition to whisky; they were a grocers as well as a wine and spirits merchant. However, there was always an inclination toward dark spirits. The original whisky products included their range of own-label blends and matured whiskies.

Today, Gordon and MacPhail are a leading distributor as well as a selector and vendor of many whiskies and blends. Today, they have an extensive range of fine, and often rare, single malts, known as Connoisseur’s Choice. Gordon and MacPhail also stock one of the largest ranges of whisky to be found anywhere, operating from their original premises on South Street. In 1993, Gordon and MacPhail purchased the silent Benromach distillery which was reopened by the Prince of Wales in 1998. In 2004, Benromach launched Traditional, the first official release from Benromach since its previous closure.

On the 24th May 2005, the company celebrated 110 years of business. Gordon and MacPhail have also released various blends under names including Glen Calder, Avonside and Ben Alder.